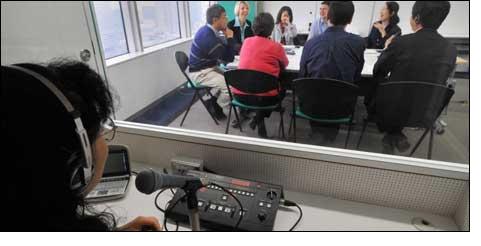 Interpreters help bridge cultural gap
Published: February 5 2010 02:00
From Mr Benoît Kremer.
Sir, The International Association of Conference Interpreters (AIIC) endorses entirely the main thrust of your article «A matter of interpretation» (February 2). Only professional interpreters can help overcome language barriers and contribute to smooth international and intercultural communication. We also fully support the need for co-operation between customers and interpreters. We are, however, disappointed that the negative anecdotal evidence quoted conveys quite a different message.

Interpretation is never about word-for-word translation; it is about grasping the meaning and conveying it, respecting the grammatical, stylistic, linguistic features of the target language and the cultural references of the audience.
Professional services are rendered by interpreters who master their languages, have undergone intensive postgraduate training, understand fully the speech they translate, and abide by a strict code of ethics including absolute confidentiality.
The misunderstandings you quote were due to interpreters without the necessary professionalism, who thus failed to meet those requirements. For example, the interpreter who revealed information to your journalist should have sealed it in her memory for ever. Confidentiality is paramount.
People with different languages and cultures need interpreters to bridge the linguistic and cultural gap but speakers must adapt their speech to international communication.
Finding good interpreters does not have to be as arbitrary as your article implies.
Benoît Kremer,
President, AIIC,
Geneva, Switzerland
Full version of the article is below:
Telling colleagues to change the entire way they work is one of the hardest things a manager has to do. Saying it through an interpreter is even harder.
That was the task faced by Gaëlle Olivier, vice-president of communication at Axa Group, the French insurance company, when she was sent to Japan to shake up a struggling subsidiary. The local managers, she says, “urgently needed to change their product offer, revisit their investment strategy and become more innovative and less hierarchical”. A tough message was made trickier to deliver by the lack of a common language.
Ms Olivier is certainly not the only executive who has had to rely on interpreters to survive overseas. In spite of the advance of English as the working language of business, companies still need to converse in the local languages of their customers. And with the opening of consumer markets in regions such as China, India and eastern Europe, the shopping list of languages that businesses must master is lengthening all the time, often outstripping their capacity to build multilingual workforces. But can managers who use interpreters be sure that what their audience hears is what they really intended to say?
Businesses that need interpretation services continuously often employ their own in-house team. This was the set-up that supported Ms Olivier. More occasional users normally hire from agencies to avoid the expense of fixed overheads. The downside is that while hired interpreters may be good linguists, they do not know your business as a company insider does and they may not follow your jargon.
How to avoid garbled communication
● Get recommendations. Anyone can call themselves an interpreter, cautions Ms Sebastian of AstraZeneca. “Talk to other businesses and get their recommendations.”
● Insist on the right personality. How your interpreter comes over as a person will affect how your company is seen, says Mr Cartledge of Benoy. Find an interpreter who suits your culture and who can project the personality of your brand.
● Look for interpreters with experience who have worked in your industry.
● Provide background information in good time. Interpreting is a difficult and demanding job. Clients who fail to provide speeches, agendas and presentations create unnecessary problems for themselves, says Mr Bennett from London Translations.
● Use simple language and steer clear of jokes.
● Don’t rely on the other side to provide interpretation for the meeting, says Mr Cartledge. If their interpreter isn’t up to the job and misrepresents you, your business will lose out.
● Don’t assume the other side has only one interpreter. Other members of the team may speak English too, although they might not reveal it. So, watch what you say in the cloakroom.
Graham Cartledge, chairman of Benoy, an international architectural practice based in Britain, believes hiring an interpreter who knew more about French literature than the building industry, lost his company a project when it first began to expand abroad. During the pitch for the work, Mr Cartledge tabled a design. He thought of it as the starting point for discussion, but the interpreter’s delivery gave the client the impression that the plan was already fixed. “There was none of the give and take of chatting freely in your own language,” Mr Cartledge recalls. “I think it cost us the business.”
Hiring the cheapest interpreters may well land you in trouble, but hiring highly qualified linguists does not guarantee a hitch-free outcome either. As Benoy discovered to its cost, interpreters need to be close to the subject matter as well as competent linguistically. And just because someone has professional letters after their name does not necessarily mean they are the best choice for the job.

“Someone who is fresh out of school may not be as good as someone with no qualifications and years of experience,” says Birte Sebastian, a communications director at AstraZeneca, the pharmaceuticals company, in Japan. “If you are hiring interpreters, my advice is to talk to other businesses and to get recommendations.”

Culture plays a huge part in the success or failure of interpretation, because the cultural assumptions that come bundled with words may literally not translate. Ms Olivier was sometimes told that a task would be “muzukashii”. Her interpreter translated this as “difficult”, which Ms Olivier took to mean tough but do-able. Only when her team repeatedly missed deadlines did she begin to understand that muzukashii is a cultural euphemism for saying “It is impossible and we cannot do it”.

Misunderstandings prompt the question of whether it is better to work with interpreters who translate word for word or with those who sacrifice literal accuracy to get across the spirit of what is being said. Ms Olivier, who has since learned Japanese, prefers the literal approach. She believes that relying on the interpreter’s potted version is risky and makes you even more of an outsider. “If you are living in a country, it is important to make yourself knowledgeable about its culture,” she adds.

The power dynamic between speaker, interpreter and listener presents another set of challenges. Ms Sebastian has spent 20 years working for western companies in Asia. She says executives who are unused to interpreters often make the mistake of looking at the interpreter instead of building a rapport with their opposite number through eye contact.

Allowing the interpreter to pre-empt what you say is another mistake. “No matter how short or simple the answer is, it is not up to the interpreter to respond for you,” Ms Sebastian cautions. “If you allow it to happen, you will lose face.”

Josephine Bacon interpreted for British Rail in its negotiations with the French and Belgian rail operators over the construction of the Channel Tunnel. Occasionally, the talks became fraught and she found herself translating insults. “There were people on the point of walking out,” she recalls. “On one occasion, one side accused the other of running an unsafe railway, which is just about the rudest thing you can say to someone who works in the railways.” Had she talked publicly about the rows at the time, the media would have had a field-day.

Could businesses do more to ensure that interpreted meetings go smoothly? Ms Sebastian says corporations often sabotage their events by not briefing their interpreters. “Familiarising the interpreter with the layout of the room, sharing the agenda and the objectives of the meeting with them, all these things can make a tremendous difference,” she says.

Humour introduces another pitfall for the unwary presenter, because so much of it relies on word play and cultural knowledge. Having witnessed the death of countless jokes in translation, seasoned presenters advise speakers to save themselves and their audience red faces by giving gags a miss. Some years ago, a group of Japanese businessmen was said to be bemused when Tony Blair, then prime minister, announced to them that he would go “The Full Monty” to push through his reforms. If you have a funny quip that you really want to use, says Ms Sebastian, at least take the precaution of confirming with your interpreters that the punch line will travel. “If the answer is no, just don’t go there,” she says.

In the rush of relief that follows a tense meeting, even the most cringe-making gaffes can seem comic. Whether they raise a laugh the next day may depend on whether the client saw the funny side too – and whether you walked away with the contract.