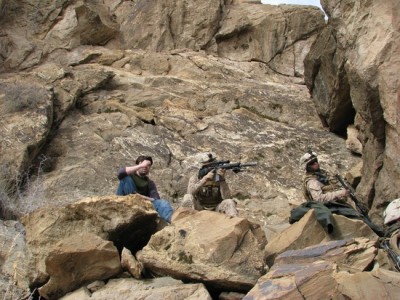 August 26, 2009, 4:00 a.m.
Portrait of the Artist in Afghanistan Scenes from the Afghan front, through the eyes of Roman Genn and Vadim Fertsovich (VKIMO).

EDITOR’S NOTE: Roman Genn, whose illustrations have long brightened the pages of National Review, embedded himself with the 3rd Battalion, 8th Marines, at Forward Operating Base Gulistan in Farah Province, central Afghanistan. Genn reports that the Marines “exhibited gallantry and intrepidity above and beyond the call of duty by tolerating your humble doodler’s permanent bitching and whining.” In photos and drawings, here’s some of what he saw — and there’s more in the August 24 issue of National Review.

“What shiny thing pointed at us? Where?” Lt. Col Vadim Versovich would not consider the illustrator human until I climbed the Hindu Kush, so the executive decision was made by FOB Gulistan’s ground force commander, 2nd Lt.Yurkovich, to let me accompany a squad of Marines going up the mountain to check on a suspected Taliban position. After a four-hour climb and one casualty (a sliding rock landed on the lieutenant colonel’s knee, prompting him to mutter: “One rock, one leg.”) we reached the evildoer’s lair, where a fresh pile of dreck and some rather pathetic (and malodorous) remains of clothing provided evidence of his presence.

Mohamedeen, for some reason, thinks I owe him money. He is definitely Taliban. Cpl. John Radu and ’Terp — that’s “Interpreter” — Hakimi converse with locals in Gulistan over the course of a lovely morning stroll.

Flying all-business class, Afghanistan style: Marines in a CH-53E helicopter open fire on a target south of Kandahar during the flight from Helmand.
— Roman Genn is a contributing editor at National Review.